Tomoko is first seen telling her boyfriend Gengo Kotaka to go get a job at the under-construction World Children's Land. He eventually lands the job, and she is pleased. She goes unseen for a great length of time before she re-appears while Kotaka and some of his colleagues are being held by Space Hunter M Nebula aliens. She quickly defeats them by the use of karate. She is dragged into Kotaka's antics and becomes involved in a rescue mission for Takashi Shima. She and Kotaka climb the many stairs to Shima's prison, and she once again uses her Karate skill to subdue the guards in the tower. They break into Shima's room and their colleagues on the ground float a zip-line up to them with a weather balloon and the three are able to reach the ground safely. 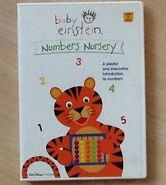 Add a photo to this gallery
Retrieved from "https://baby-einstein.fandom.com/wiki/Tomoko_Tomoe?oldid=30123"
Community content is available under CC-BY-SA unless otherwise noted.