Ages and Stages is a video you and your baby can "count on." Silly puppet shows, playful children, colorful toys, and Classical Music by Mozart, Vivaldi, Bach, Beethoven, and Tchaikovsky expose your baby to numbers from 1 to 10, counting, and explanation. Also, Nancy Cartwright and Linda Larkin stop by to sing "That's My Number," a groovy funk jazz tune. 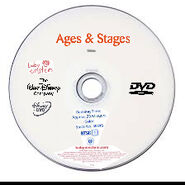 Add a photo to this gallery
Retrieved from "https://baby-einstein.fandom.com/wiki/Ages_and_Stages?oldid=31815"
Community content is available under CC-BY-SA unless otherwise noted.